Historical events and scholars have played a significant role in or contributed majorly to the English language. Most of the phrases and terms commonly used in modern-day communication have their roots in classical literature, and they are not always derived from Latin, Old French, or any other ancient language. The beginnings of the phrase "leave no stone unturned", for instance, are deep-rooted.

The expression "leave no stone unturned" means "putting in all effort to find out a thing or fulfill an activity". The phrase implies an implicit promise to get the job done. It is typically used in texts to denote an "earnest and thorough effort" and also as a form of appreciation or praise.

To learn more about the phrase, the history behind it, how to use it in texts correctly, and lots more, keep reading.

The phrase "leave no stone unturned" implies "making all possible efforts to achieve or get something done". Generally speaking, the phrase denotes "using every possible option or exhausting every available resource when attempting to solve a problem or completing a task". It signifies "doing things conscientiously and comprehensively without missing a step".

The saying is typically used in contexts where there's some kind of "searching" involved. But then you can use the phrase in situations that don't entail "hunting for things". "Leaving a stone unturned" would imply "not looking in an area where the missing thing might be" or "failing to try a particular method to complete a task."

The basic premise behind the saying is if you were to look for a thing in an area filled with stones, you would likely turn over or dislodge each piece of rock to check if the lost object is lurking somewhere underneath. The "search" carried out is usually within a particular location's boundaries. It could entail moving abstract things or physical objects.

When the phrase is used in the "finding things" context, it essentially means "look everywhere". When used in the "problem-solving" or "task completion" situation, the expression denotes "try everything".

Proverbs or phrases similar to or synonymous with "leave no stone unturned" include:

The phrases mentioned above may or may not be proverbs or recognized expressions, but they mean identical or something similar to "leave no stone unturned". 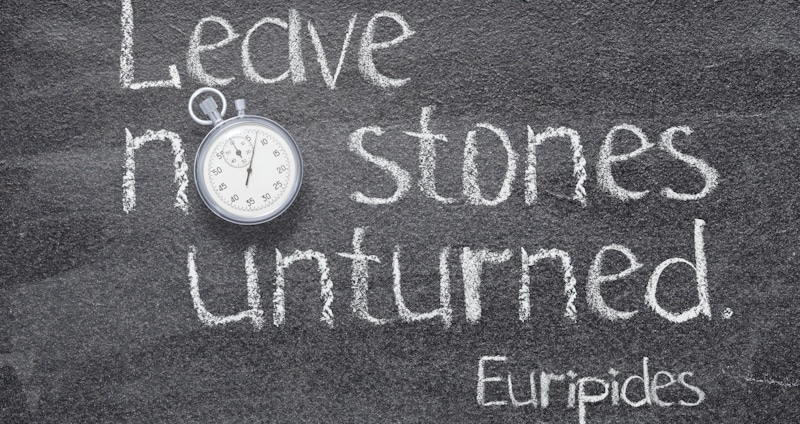 The Origin of the Phrase

There's no proper documented evidence stating the origin of the expression. But there are quite a few legends, which may or may not be accurate.

According to Greek mythology, Apollo Pythios, a Greek god, and the oracle of Delphi then, uttered those words to Polycrates. It was when Polycrates was trying to unearth treasure buried in a land that he had bought after hearing rumors of wealth being hidden by Mardonius, a Persian military commander.

When Polycrates initially couldn't find the supposedly hidden treasure, he consulted Apollo for advice, who said "leave no stone unturned" in response. Paying heed to the advice, Polycrates started to look for things hidden behind or under every rock literally. And as he kept doing that, he happened to find a massive hoard of gold.

Others believe the phrase has nothing to do with the "Apollo story" and that the metaphor has its roots in the activity wherein people hunt for crabs alongside the seashore. This origin tale seems plausible as crabs generally lie hidden beneath rocks that people move when looking for the decapod variety.

In the Heraclids or Heracleidae, it's believed Euripides, the tragedian from ancient Greece, used the phrase to mean "leave nothing undone". He was perhaps just recounting the Greek legend mentioned above.

Using the Phrase "Leave No Stone Unturned" in Texts

As mentioned above, "leave no stone unturned" denotes a "search". The proverb is commonly used in texts or speech to praise or highlight someone's diligent work or to guarantee a thorough search, as a result.

Here are a few example sentences illustrating that:

But then the expression doesn't always signify a "hunt". You could also use it in texts that entail "getting things done" or "accomplishing a mission". For example:

The phrase is often used in terms in its "past tense" form. For example:

As mentioned above, there are quite a few other phrases that you may use interchangeably with "leave no stone unturned". The following is a list of sentences that use those other phrases:

"Leave no stone unturned" is a metaphor, and it's primarily used in texts in the figurative sense. It's rare to see the expression being used in texts for its literal meaning.

The following is a list of sentences incorporating the phrase "leave no stone unturned" in different contexts:

When you exhaust all available resources and put in maximum effort toward achieving a thing, it implies you "left no stone unturned". People who are pursuing something important or tasked with a critical job are determined to "leave no stone unturned". Those who are not keen on a given task would only look for excuses to explain why they couldn't accomplish a particular thing.

As clearly explained multiple times above, use the phrase in your texts only to indicate a "search" or the "thoroughness of an action". "Half-hearted attempts" should not be described with the metaphor. Also, if the need to mention "leave no stone unturned" arises in your prose multiple times, use some of the synonyms mentioned above instead.