The phrase “in the red” is usually applied in business settings and refers to the conventional bookkeeping practice of writing outgoing funds in red. When “in the red”, the company or person involved owes money, thus being in a state of debt.

In short, “in the red” means a person or business is losing money or is in debt. It also refers to when there is more money going out than coming in. If your bank account is in the red, it means you owe money to the bank. The company has been “in the red” for the last two quarters.

An idiom is a word, expression, or phrase that has a metaphorical definition not easily understood from its literal meaning. We will detail the definition of “in the red”, as well as related phrases, their origin, and some examples of how to use them.

Origin Of The Phrase

When you find yourself spending more money than what you earn, you can easily fall into a negative balance which will leave you “in the red”.

The origins for many phrases and idioms are uncertain, however, there are possible backgrounds that can guide us better in understanding the phrases.

“In the red” originated from the domain of bookkeeping and profit and loss balance sheets. Red ink was traditionally used to signal debit entries and balances that were owed in accounts or financial loss, thus the literal “in the red” expression. Favorable entries and profits were written in black, therefore, this phrase is the opposite of “in the black”, which means money was gained over a while and the company saw a positive balance. If money was lost in a given year, a company would be “in the red.” If money was made, it would be “in the black”.

The reason why red ink was used isn’t sure. Red markings for important dates, for example, ‘red letter days’ on calendars that indicated alerts may have influenced the traditional red ink use.

Regularly, when accountants are writing the amount of money they have available, they use a black pen and when they are writing money they don’t have, they use a red pen. Most computer programs also have black and red features for the same purposes. The term has survived in the age of computerized systems.

How old is this phrase? It is thought to have originated during the early 1900s. This idiom’s first-time publication in print was in 1907 in Money and Investments by Montgomery Rollins. Another newspaper article referred to the phrase in 1927. The Daily Globe published under the subheading ‘Failed to get Interest’:

“I regret to report to you that the people who put money into it failed by $30,000 to earn even operating expense and depreciation. The company is in the red all the time.”

Before, the phrase was expressing the same meaning that it presently has; it is communicating about a loss of money.

How To Use The Phrase

As we’ve mentioned above, if your company is “in the red”, it means that it is in debt and, therefore, owes money. The symbolic red ink, signaling financial losses, means that you have more disbursements and bills than you can cover with the amount of money you have at your disposal to pay them.

The red color calls for a sense of emergency that advises business owners that quick action needs to take place to get their finances on the right course.

Some businesses experience being in the red at any given time during their life cycle; it can only be temporary and will depend on the structure of the business and how your money is collected. For example, if you have $1500 in cash and have $2000 worth of expenses and bills to pay, you are $500 in the red. Let’s say you decide to pay using a credit card, you are still in the red because you now owe the credit card issuing entity.

It is common for new companies to start in the red and stay there for some time until they generate enough earnings to cover their expenses. This is why it is important to count on a good capital amount to inject into the business while it takes off. If the business is frequently in the red, it may be a concern for the business owners as it can intimidate shareholders and prospective business investors.

Depending on the amount of time or frequency your company is found “in the red”, you may need to carefully evaluate processes, external factors, management, etc., that may be affecting the progress of your business.

People also go through “in the red” periods in their finances, where cycles of “in the red” and “in the black” come and go. A great year at work or for your company could mean that you earned a lot of money. You may have received an inheritance of a good amount of money which immediately took you out of the red for a brief period. These scenarios are not necessarily consistent and may continue to vary year to year.

You may have also made a significant purchase which left you in the red for some time. The objective is to try and keep these deficits at a minimum and only surge when mandatory, in other words, not make it standard practice. There are many cases in which businesses and people fall into an “in the red” system without having a clear vision or plan on how to come out of it. 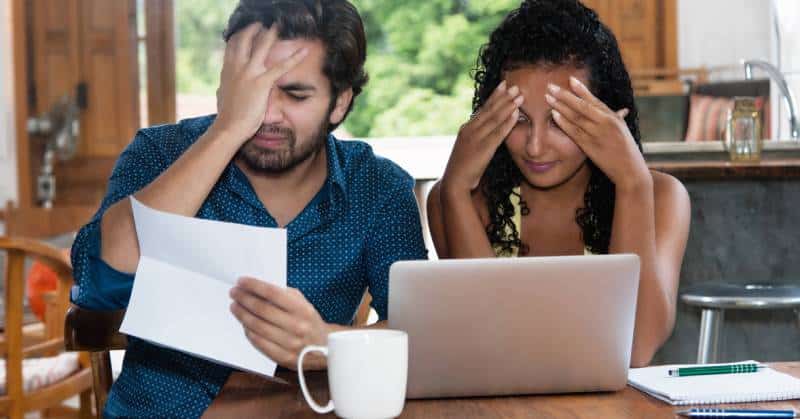 Examples Of The Phrase In A Sentence

Here are some examples of the opposite idiom “In the black”

When your iPhone’s battery power lowers to 20% or less, and the battery icon turns red.

When you have the music volume up too high and it is so loud that it hurts your ears.

“In the red” is basically describing a status of instability and when something is wrong. It is mostly used as a financial expression to describe a company that has faced an economic loss or owes money.

Even if you are not a finance guru, you may have heard this phrase before or it may be one you regularly use as an English speaker. “In the red” is commonly used in everyday conversation to express if a person has their bank account or finances in a negative balance.

It is a unique way of saying that they are spending more money than what they have in their account, therefore, are owing money to the bank.