Not every person you meet or every situation you are in will confer joy or satisfaction. There are people who you may despise but cannot avoid, and there could be circumstances you may want to bail yourself out of but may not be able to immediately. Regardless of how you choose to sever your ties with an individual or escape a situation, make sure you do it harmoniously, or you do not "burn your bridges".

The term "burn bridges" means "committing to a path or goal with no return point". Denouncing your boss' marketing strategies on the last day of your job is "burning bridges". The phrase can be altered in texts to suit a given sentence or context, as in "burn your bridges", "burn one's bridges", etc.

If you're curious about the origin of the term "bridge" in the phrase, want to learn about the phrase's literal meaning, how to use the expression in texts, or in what contexts, continue reading.

The idiomatic phrase "burn bridges" means "the inability to revert to an earlier state or position". In other words, "burning your bridges" implies being forced to continue with a specific course of action, with no point of return or the provision to reinstate the original.

The thing you may want to restore to its earlier position could be a relationship or situation. In interpersonal relationships, "burning bridges" means having alienated someone for good. Besides relationships, other things that can have their "bridges burnt" include "path", "reputation", "connections", and "opportunities".

Generally, the bridges that get burnt or the connections, relationships, etc., that get wrecked are done intentionally, usually rooted in hubris and/or ignorance.

Origin of the Phrase "Burn Bridges"

The idiom "burn bridges" supposedly have their roots in ancient Rome. However, the phrase was not commonly used during those times. The expression entered regular use only during the 1800s.

Like several idioms, this phrase also has a literal origin. In Roman warfare, it was common practice to destroy bridges. At times, the bridges were brought down to prevent enemies from fleeing once they entered the territory. Bridges were damaged not just to stop the enemy's escape but also to cut their supply lines.

In other instances, bridges were destroyed so that there was no way for a retreat. This means the Roman armies had no option but to fight to victory or death.

Similarly, ancient navies destroyed their boats upon setting foot on enemy shores. The ploy was used as motivation or to serve as a constant reminder that they cannot retreat or had no option but to win the battle. The vessels, of course, were obliterated after everybody on board disembarked.

Though not as popular as "burn one's bridges", the phrase "burn one's boats" has been around for longer than its more famous sibling or is at least more than two decades older than the expression that includes the term "bridge".

"Do Not Burn Bridges" is Good Advice, Generally

Burning bridges is usually not wise as doing so leaves you one option or recourse. It's particularly critical to not "burn bridges" in the business world. Contacts and networks propel you in the corporate world, and rubbing on the wrong side of people is pretty much self-inflicted damage.

For example, suppose you are starting your own business and bidding adieu to your current job. In that case, it's essential to part ways with your existing (soon former) employer on an amicable note. In other words, do not "burn the bridge" between the two of you. Because if things do not work out as planned with your venture, you may feel the need to get back to your old job.

If your position has been filled, you'll have to look for a job elsewhere. And suppose you were not particularly friendly when quitting your earlier job. In that case, that may have had a ripple effect, or word could have spread about your "unprofessional" behavior, hurting your chances of getting a job elsewhere.

Even if your venture does well or goes as planned, it's good to have parted ways with your boss on friendly terms. If your own business is in the same line as your previous company, good relationships with your former colleagues could benefit your enterprise. 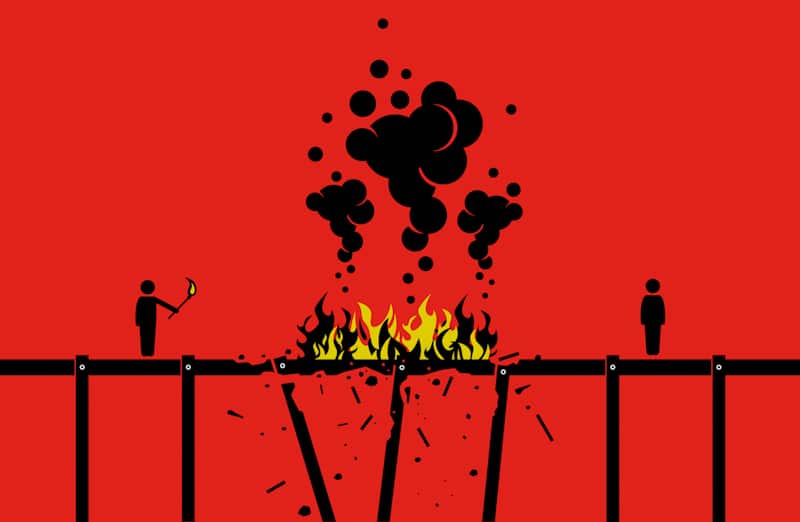 The word "bridges" is used in quite a few idioms or phrases in English, including:

A couple of phrases, however, not just use the term "bridge" but are also a lot more similar to "burn bridges" in meaning:

"To burn the bridge when you come to it" means "anticipating a situation or problem beforehand and functioning in a way that cuts ties or alienates when the need for the same arises". For example:

The phrase effortlessly marries "burn bridges" and "cross the bridge when it comes".

The saying "cross the bridge when it comes", on the other hand, has a relatively positive connotation. It means "dealing with a difficult situation or a problem when it happens". It doesn't suggest "anticipating difficulties" and springing into action or damage-control before time or being prepared for it. For example:

Not to mention, both the phrases can be altered a bit to suit a given text or fit nicely into a sentence. In other words, minor alterations such as "I'll cross that bridge when it comes/when it arrives" are acceptable.

A few other avatars or inflections of the phrase include:

Though not similar by words, "wash your hands of" or "wash one's hands of" is yet another phrase that means something similar.

The following are sentences/passages that incorporate the phrase "burn bridges" in different ways:

Burning your bridges is never a great idea – be it at the professional front or in your personal life. Quite often, the need to look back and return to the point arises.

However, there can be certain bridges that should be burned – a bridge that takes you back to a state you don't want to revert to or closer to a thing that's not desirable. Maybe your earlier day job was horrible, paid minimal wages, and caused you more stress than your current entrepreneurship struggle.

At times, burning bridges affords you the "light" required to move ahead to better things in life.