Idioms or similar expressions have symbolic meanings that differ from what the words mean literally. In other words, they are used in texts or speech to put a point across tacitly. At times, it may not be appropriate to say things out bluntly or without concealment.

The idiom "bun in the oven" denotes "being pregnant" or "the state of pregnancy". Though it could mean an actual bun baking in an oven, the phrase is invariably used in texts figuratively. It's a form of euphemism employed when using the exact word "pregnant" may be rude or inappropriate.

If you're writing an academic essay, a leave application letter, etc., refrain from using the phrase. To learn why is the idiom "bun in the oven" deemed unsuitable in business or formal settings, how to use the phrase correctly, and lots more, keep reading.

"Bun in the Oven" – Definition

The idiom "bun in the oven" or "have a bun in the oven" means "being pregnant" or "expecting a baby". It's just the other way or more casual or supposedly "cool" way to say "you're pregnant". A mother's womb provides shelter and warmth to the developing fetus. An oven affords heat and protection from external elements to the bun. This is how the idiom and pregnancy are connected.

Not to mention, the phrase has majorly contributed to babies being referred to as "buns", as in "cutie bun", "honey bun". That said, the term "bun" can signify a host of other things, besides the literal meaning or referring to the bread itself. A "bun", for instance, is a hairstyle too.

Alternate Slang Terms/Phrases for "Pregnant" or "Being Pregnant"

"Bun in the oven" isn't the only slang term or indirect, informal way to state or signify "state of pregnancy". A few other slang phrases meaning "pregnancy" exist too, including:

Most of them have British origins or are informal British phrases/terms and are unlikely to be used in U.S. English.

A few other ways to say or denote "pregnancy" include "carrying a child", "with child", "expecting", etc. These, quite clearly, are not as "slangy" or "informal" as the phrases mentioned above.

Origin of the Phrase "Bun in the Oven"

Unsurprisingly, this phrase or idiom comes from the kitchen. When a baby is in its mother's womb, it develops and gets bigger as it matures. Similarly, when a bun dough is placed in an oven, it rises or inflates as it bakes. The "bun" denotes the child metaphorically, and a woman's womb gets likened to an "oven".

Using the word "oven" to denote a woman's vagina or womb has been in effect since around the 17th century. The actual phrase, however, is relatively recent or featured in Cruel Sea, a 1951 novel. Nicholas Monsarrat, a British novelist, has been credited with coining the phrase.

In the novel, Bennet references being pregnant, saying, "I bet you left a bun in the oven, both of you". After making that remark, he lurches out of the space.

The phrase is used again in the same novel by another character, Morell, who suavely remarks, "Perhaps you have a bun in the oven". Comparatively, this "bun in the oven" comment is more of a tease or made in a relatively light-hearted manner, evoking laughter.

After having been featured in Cruel Sea, the phrase has been used quite a bit in several other books and literary works that followed. 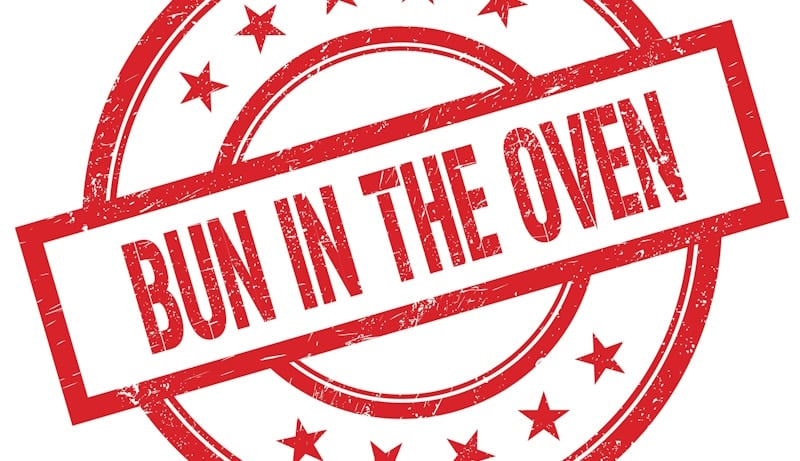 Using "Bun in the Oven" in Texts

The phrase "bun in the oven" could be used both literally and figuratively, as mentioned above. It could refer to an actual bun placed in an oven for baking. But such a mention is rare. The phrase takes on a more "metaphoric" avatar pretty much every time. This sentence or line, for instance, is a perfect example of how the phrase is used metaphorically:

The idiom is considered informal language and is, therefore, unlikely to be used in standard texts or interactions. For instance, if your wife got pregnant, she may communicate it to you, exclaiming, "I have a bun in the oven!".

However, her doctor won't use those exact words if they happen to break the good news to you first. The obstetrician would instead simply stick to the term "pregnant".

The "informal" nature is further substantiated when online word processing tools and spell checkers recommend the term "being pregnant" each time you use the phrase.

There, however, could be or are exceptions to this rule. For example:

The phrase can also serve as a form of euphemism when a direct mention may come across as "rude" or "offensive". For example, if a small group of employees in an office discusses the rumored pregnancy of a colleague outside of their ingroup, they may use the "bun" phrase instead of saying it out bluntly.

The idiom is used in romantic novels or songs in a lighthearted way or to cite eroticism. For example:

The above line is from the song "I Can See the Future" by Eleni Mandell. The line intends to send the message that women have romantic feelings or want to be loved by their men even when they're pregnant. It tries to quash the cliched thoughts surrounding pregnancy or the general notion that pregnant women always act histrionically.

Examples of the phrase being used in songs and/or poems are quite a few. Jethro Tull, the British rock band, employs the phrase in their music, "Living in These Hard Times" from their 1978 album "Heavy Horses". The exact line in which the phrase appears is:

The line sarcastically talks about the increasing world population and another pregnancy during bombastic politicians' times not being a great idea.

Besides books and poems, the phrase could be used as tongue-in-cheek in news publications. For example, in a news article in The Sun on January 29, 2019, a journalist named Rebecca Flood used the phrase to make public Meghan Markle's pregnancy.

The expression is commonly used in a few other languages, including German, Italian, and Danish.

Kindly note, the aforementioned texts could be used in both their figurative and literal senses.

Example Sentences with the Phrase "Bun in the Oven"

The following are sentences that incorporate the phrase "bun in the oven":

If writing for a publication, it's strongly advised to use the term "pregnant" instead of "having a bun in the oven".

Here are a few sentences that use the phrase for its literal meaning:

When used metaphorically, the idiom "bun in the oven" is unlikely to be misconstrued. It's a relatively common phrase. However, it's recommended to use it in your texts with discretion. If writing a blog post, use it just once so that your writeup doesn't come across as too informal.

If writing for formal publications, incorporate the phrase only as "tongue-in-cheek" or when you're confident about your grasp over the language. Only a skilled writer can pull off slang terms in formal write-ups without anybody noticing.

And if you're looking to use other phrases or idioms to mean "pregnant" or "pregnancy", use any of the ones mentioned above.