You are likely to hear the word “tumultuous” in news or stories about riots or protests because this is the best word to describe disorder or turmoil. However, the word is broad, and you can use it to mean the state of unrest. We will look in detail at the tumultuous definition, meaning, and usage.

The definition of the word “tumultuous” is having great noise, chaos, disturbance, or uproar. Use the word when describing loud noise or sound. Replace the word “shrill, noisy, or loud” with “tumultuous” in sentences that describe the word.

“Tumultuous” is not an easy word to understand unless you take your time to read the various definitions and meanings. That way, you will better comprehend when to use the word, but note that not all the noise you hear is “tumultuous.” Here is more about the word, from pronunciation, spelling, and history to usage in sentences.

What is the Definition of Tumultuous?

Some relationships are a true definition of violence, turbulence, or upheaval. Such a relationship leaves one, or both parties involved distraught and much stressed. In extreme cases, people will even doubt themselves and choose to isolate themselves from society. If this is your situation or the situation of someone you know, then you can best describe the relationship as tumultuous.

What is the Meaning of Tumultuous?

Tumultuous is an adjective that means “tending or disposed to cause or incite tumult.” Use the word to describe something or a situation that will bring a state of noise, commotion, or confusion.

Some decisions can impact the way people live and how they behave. It could be a decision or rule from the government, office, school, or your home. If the rules or decisions are not well received, it is likely to cause a “tumultuous” situation as people riot, protest, shout, boo, or strike.

From the meanings discussed earlier, you can tell that this word fits in various contexts. Here are some areas you can embrace this word.

Words with the Same Meaning as Tumultuous

Are you searching for synonyms of the word tumultuous? Then you have come to the right place. Here is a list of words that you need to consider.

Words with the Same Sound With Tumultuous

Are you a writer, poet, reporter, or someone who likes to play around with words? If that is the case, you might want to use words that rhyme with tumultuous. Here is a comprehensive list.

How to Use Tumultuous in a Sentence

The word “tumultuous” is an adjective that means noisy, tumult, and great disturbance. It is also a negative word, so, when using it, ensure that you use it when the noise or confusion you are talking about is not pleasing.

Tumultuously (an adverb): It means “in a riotous manner.”

Tumultuousness (a noun): It means “a state of noise, commotion, and confusion.”

10 Examples of Tumultuous in a Sentence

Read the ten sentences with the word tumultuous below, so you can learn the best way to use the word.

How Do You Spell Tumultuous?

Most people assume that correct spelling is not essential and that the quality of the writing matters more. The truth is spelling is vital when it comes to quality checking your work. Correct spelling is significant in writing and helps you become a confident writer.

How Do You Pronounce Tumultuous?

The correct way to pronounce “tumultuous” is “tuh.muhl.choo.uhs.” You can also pronounce the word as /tyoo.muhl.tyoo.uhs/.

Start the first and second parts slowly, then complete the last sounds fast when pronouncing the word. Did you know that pronunciation can impact the way people listen to your speech? If you want people to be attentive and take you seriously, improve your pronunciation and diction.

How Many Syllables Are In Tumultuous?

The word “tumultuous” has four syllables. These syllables are /tu-mul-tu-ous/” The stressed syllable of the word is “mul.” 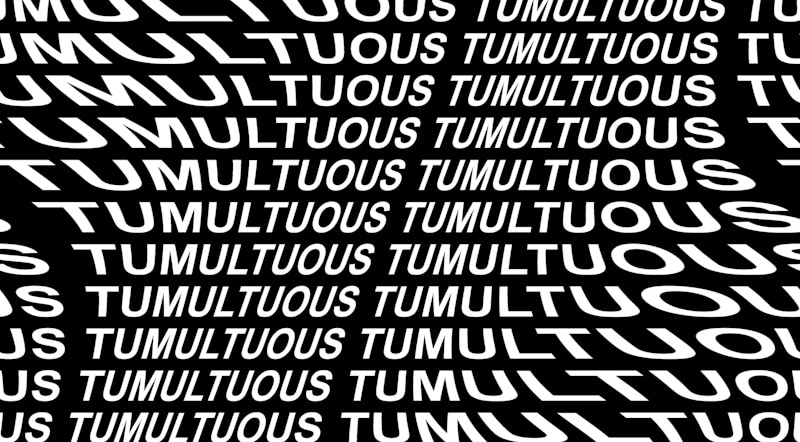 Another root of this word is “teue,” meaning to swell. However, over time, the meaning has changed to noise and chaos. That’s what people know this word for currently.

When Was Tumultuous First Used?

The 1540s is the recorded time when “tumultuous” was first used.

Learning a new word is excellent because it enables you to express yourself better. Having read this article, you will no longer struggle to describe extremely noisy situations or chaotic instances. Instead, in both these situations, use the word “tumultuous.” It will reveal how smart you are when using different English words to describe varying situations. Don’t forget to take your time to practice the word through creative sentences.