Both are humid, both contain water, but they are not the same thing. A swamp and a bayou could be related but not equal. It might not be obvious, but you are not the only one that might be wondering the meaning of each and the difference between these two terms. So, how to tell a swamp apart from a bayou?

What tells a swamp apart from a bayou is the amount of water each has. A swamp is a piece of soggy, mushy land, while a bayou has more water, and it is a river-like water body that tends to have slow-motion current and dirty and smelly water.

Now that you have seen the most essential difference between a swamp and a bayou, you may want to dig a bit deeper into the definitions and characteristics of each, as well as how to use these two terms in a sentence and some good examples of each word.

A swamp is a wetland that is always submerged in water. Water has covered the plants that grow around the area. The ground is low, and even though there are some types of trees that grow in the area, the land is not suitable for agricultural and pastoral purposes.

Saltwater swamps and freshwater swamps are the two types of wetlands. Trees like cypress, cedar, and mangroves are among the types of trees that can grow in swamps. Scrubs, such as the buttonbush, can be found in swamps as well.

Swamps get their water from groundwater and surface water.

A bayou is a tiny, slow-moving stream that runs through lowlands or swamps. It has a sluggish, nearly undetectable current flow in general. They are the muddy outflows of a lake or river. They tend to have a dirty look and an off odor. Bayous can be found everywhere along the Gulf Coast of the United States, particularly in the Mississippi River Delta.

According to legend, the English coined the term “bayou” in Louisiana, and it is supposed to have originated from the Choctaw word “bayuk,” which means “little stream.” The Cajuns were the first to settle on Bayou Teche and other bayous, which is why bayous are connected with Cajun culture. Bayou St. John, for example, feeds into Lake Pontchartrain in New Orleans.

How To Properly Use These Words In A Sentence

If we talk about a swamp, we will be referring to a soft ground submerged in water. But people also use it as a verb to talk about covering a place or thing with a considerable amount of water.

Also, the word “swamp” is used as an idiom to talk about having too much of something or too much to do, more than one can handle. This idiom can be used as a reference to drinking too much alcohol until getting intoxicated.

Swamp is a very flexible word; it can also be used as an adjective to express that something or someone is covered with water or very wet; and most of the time, people will add “y” at the end when using the adjective form, creating the word “swampy.”

List Of Examples of These Words Used In Sentences 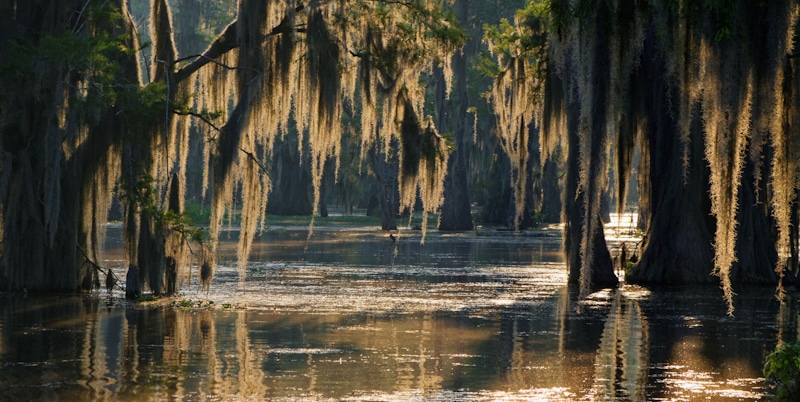 Wrapping Up The Swamp And The Bayou

In a few words, a swamp is a mushy wet piece of ground; it doesn’t have a lot of water, but there’s enough to soften the surface. Swamps can have some trees growing inside them and usually get their water from groundwater and surface water.

On the other hand, bayous are more similar to rivers, but they have a slow, almost non-existent flow. The water is sometimes dirty and smells funky. Bayous are the habitat of alligators and various species of reptiles such as lizards, turtles, horned toads, moccasins, and rattlesnakes.

These two words are really different. And one must not be used to replace the other.