They both have a black tail with grey rings and are sometimes mistaken for each other. But how similar or how different are ring-tailed lemurs and raccoons? In this article, we will tell you the characteristics of each of these mammals, but first things first. What are the differences?

The most crucial difference between a lemur and a raccoon is where they live. Lemurs are from Madagascar, and raccoons live in the USA. Also, raccoons are omnivores, while most lemurs are herbivores. Another difference is their skulls; they are pretty different from each other.

To point out all the differences between raccoons and lemurs, we made a list comparing certain facts like diets, habitats, among other things. They might indeed have some similarities; they are both mammals, some lemurs are omnivores like raccoons, and a type of lemur, the ring-tailed one, has grey rings in their tails, just like raccoons. With all of these being mentioned, let’s go to the details about these two furry mammals.

What Are The Sizes And Weights Of Raccoons And Lemurs?

About lemurs, they come in different sizes; depending on the species, they could be between 24 and 35 inches long, such as the indri species, which are the biggest ones, or just 8.5 to 10 inches, including the tail, which is the case of Madame Berthe’s mouse lemurs. They can weigh up to 22 pounds or even just 1 ounce, depending on their body size.

Now, when it comes to raccoons, they do not have a wide range of species, so they are about the same in terms of their size. They can be as little as 23 inches and up to 37 inches for the larger ones, and they can weigh from 4 to even 23 pounds.

Lemurs have a considerable variety in appearance. There are 113 known lemur species, and their body size ranges between 8.5 inches to 35 inches. As a result, they can be super different from each other. One of them is the ring-tailed lemur which is pretty similar to a raccoon. They have different shades of grey throughout their entire body with white bellies, chests, and faces. Lemurs have almost black triangular patches in their eyes and dark noses. The similarity with raccoons is in the tails of these mammals. Lemurs have 13 rings in their tails, with alternating black and white bands.

The raccoon family consists of only six species, with the possibility that a seventh species may exist. All of them are grey with some black and white markings and some beige shades. Their bellies are a light shade of grey, and their faces are somewhat white with black undereye patches. They have light grey and black striped tails, and their bodies are sturdy with short legs and flat feet, which might be why some people say they are like small bears. 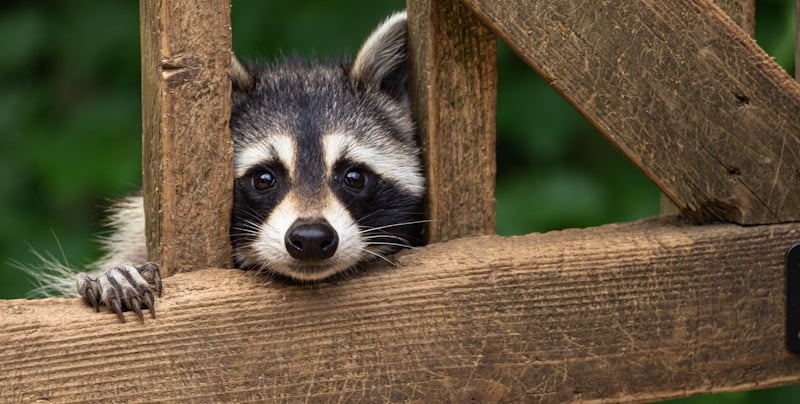 Where Do Raccoons And Lemurs Live?

Lemurs live in Madagascar, and some species can be found near the Comoros Islands, just between Mozambique and Madagascar. In contrast, raccoons live in Central and North America, Europe, and even Japan.

Depending on the species, lemurs can be found in rainforests, dry forests, spiny forests, wetlands, and even mountains and tropical climates. On the other hand, raccoons are very adaptable, so you can find them in a wide range of habitats.

Raccoons can be found in wooded areas and backyards; they make their homes in trees or little caves, abandoned vehicles, and even in barns.

What About Their Habits?

Lemurs can be active during the day, night, or both, depending on the species, weather, season, and the foods available to them. Some lemurs hibernate during the dry season for up to seven months; when there is not enough food, they survive thanks to a fat reserve.

When it gets cold, some lemur species like to get sunbaths during the day to warm up. They acquire a funny position; they sit and spread their arms wide open as if they were showing some sort of reverence to the sun.

Diurnal lemurs tend to be social and live in family groups. These groups support each other by announcing predators. On the other hand, nocturnal lemurs use the darkness to hide; these lemurs have a complex social life. However, some of them, even the loneliest ones, do sleep together occasionally.

Another sleeping habit worth mentioning is that some mouse lemurs like to sleep half the night by themselves and the other half of the night in groups. This last practice helps them stay warm and protected from predators. However, some will still sleep alone and use birds as their alarm; birds announce when predators are nearby.

It is natural for lemurs to groom themselves and one another, and for that reason, they have six teeth that are fused together and act like a comb. To clean their teeth, they have a secondary tongue called sublingual, which works like a toothbrush and is located underneath the primary tongue.

Raccoons, however, are not very friendly, so they are not as social as some lemurs. They are active during the night and sleep throughout the day. They do not hibernate traditionally, but they sleep more during the winter; they do their type of hibernation until they run out of stored fat.

Raccoons are also very clean, opposite to what people might believe; they clean their food and dig latrines in the area they frequent.

What Do Raccoons And Lemurs Eat?

The diet of lemurs might differ from one species to another, but they are mainly herbivorous. Lemurs are picky when choosing their food, and they just eat from a few tree species; there is a lemur species that specializes in eating just bamboo.

Though most lemurs are herbivorous, some species, like the ring-tailed lemur, are considered omnivores due to them eating almost anything available to them, including spiders, chameleons, and even tiny birds.

Raccoons, on the other side of the spectrum, are just omnivores. They eat a wide variety of foods, like apples, cherries, acorns, berries, peaches, citrus fruits, plums, persimmons, figs, wild grapes, watermelons, nuts, and corns. On the meat part, their diet consists more of invertebrates, and their favorites are fogs, fish, insects, rodents, bird eggs, and crayfish. During difficult times, when food is not easy to get, they will dig into people’s trash or eat roadkill.

To help you see side by side the different aspects, we compared above, we made a summary table with the highlights of the information we collected.

It is safe to say that both raccoons and lemurs share a lot of similarities. However, as we have previously seen, they definitely share multiple differences. Whether it be their size, color, weight, sleeping habits, or diets. We are sure that you can now tell the difference between these two very intelligent animals.