To lie, deceive, hide, cheat, etc., is relatively easy. But it takes a person with integrity to own mistakes, stay truthful to their partner (life or business) irrespective of how bad the temptation to err is, etc. For people with "integrity", stealing an idea, adultery, etc., are difficult to pull off.

"Integrity" is not going against one's conduct code. The word should be used in texts to state or highlight a person's honesty, reliability, humility, empathy, patience, willingness to admit wrong, etc. Also, "integrity" is always used in sentences as a noun – never as an adjective or adverb.

"Integrity" is a deep topic meriting a discussion that throws light on more than just how to use the word in your texts. If you'd like to know more about the word's meaning, its significance, and also how it gets used in sentences, and more, keep reading. 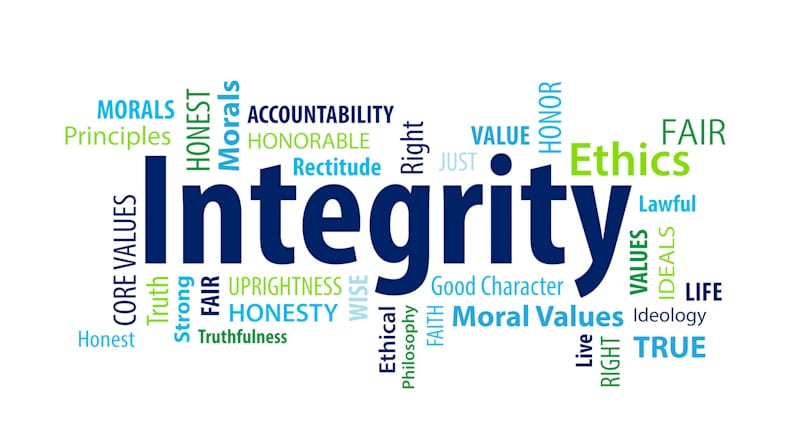 The term "integrity" means "conforming to your inner ethical or moral convictions and always doing the correct thing – irrespective of the circumstances or who's watching or not watching you".

It's the state of staying entire, undiminished, or unimpaired. If your "image" is what other people think about you, "integrity" is your opinion about yourself. And that is something only you have access to or insightful information about.

A person with "integrity" will be honest to themselves and won't resort to any action that dishonors or demeans them or makes them feel ashamed or embarrassed in front of others.

The following are things that get identified with people of "integrity":

"Integrity" is not just a set of principles to always abide by or showcase when the right time comes. It's something that becomes apparent even in the smallest or routine things one could do.

Breaking for coffee and snacks when one should be at their desk working on a given task shows the lack of integrity. Using office materials for office work alone and not for personal or home use when there is the opportunity to do so is a sign of integrity.

A few terms that are synonymous or closely related to the word "integrity" include "goodness", "honesty", "rectitude", "probity", and "righteousness". These individual words summarize the meaning or ethos of "integrity" rather than being direct replacement terms.

"Honesty", for instance, denotes "refusing to lie, deceive, or steal". Integrity is all that, but also more. Similarly, "honor" signifies an active consideration for the standards attached to one's calling, position, or profession. "Integrity" is that as well but not directly.

To talk about the origin, "integrity" is rooted in the Latin and Middle French word "integrite". And the English term was first documented to be used during the 14th century. 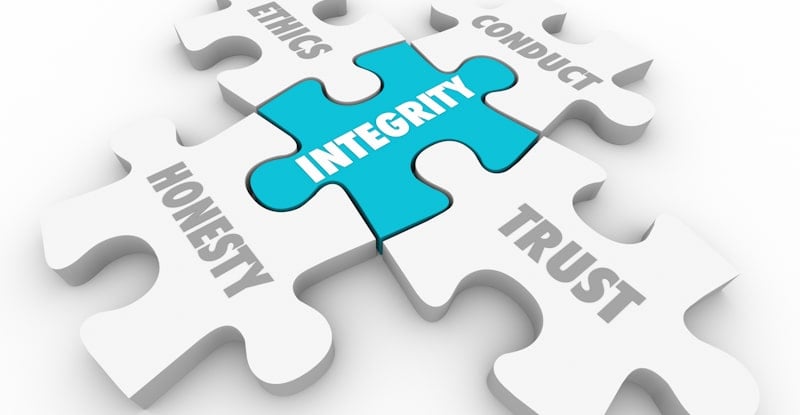 "Integrity" is a Highly Valuable, Sought-After Trait in Leaders

"Integrity" is a precious trait to have, particularly when in a position of leadership. Integrity and honesty in the workplace ascertain how far you progress in your career and the milestones you hit. Leaders should stand up for their beliefs. And to do that in every possible scenario, "integrity" is paramount.

Great leaders help form great businesses. The companies that remain successful for long and continue to succeed are the ones devoid of scams, corruption charges, wrongdoings, misrepresentations, etc.

In the past, companies without a moral compass have made it big. But they did not stay at the top for long. And once their miscreances were uncovered, they fell hard and never got up on their feet again. Enron Corporation, the American energy firm, is a solid example. Why did Enron fail? Because it had dishonest and corrupt leadership in charge.

Staying true to your moral values – particularly when you're at the helm of an organization – is not easy. It can be quite tempting to do the wrong thing as that's the easier way out and perhaps also lucrative.

But if you choose to stick to your guns and face all challenges and hurdles, the result will speak.

A piece of coal doesn't turn into a diamond overnight. It takes millions of years. Thankfully, you don't have to wait so long to reap the fruits of your integrity and honest leadership. A year or two is often the timeframe to see the outcomes of your good deeds. At times, it could take more or lesser time than that. And this applies not just to business and leadership but also to personal lives.

As Zig Ziglar puts it, "Integrity by itself will not turn you into a leader, but the lack of it would never make you one."

Integrity and selflessness may seem like two different topics of discussion, but they are surely linked. A person with integrity will never think only about themselves. In other words, they put the needs of others above their own.

Most importantly, the individual is not putting others' desires or needs above theirs to get recognition and praise. They do it because it feels right to them.

Helping others when the need arises is also a sign of integrity. Though social service and integrity could also seem like two different topics, a person with integrity will have zero qualms about spending time, effort, and even money to help the poor and needy. This inclination again stems from the lack of self-centeredness or the ability to think about others.

Using the Word "Integrity" in Texts

The term "integrity" is a noun with a simple, straightforward meaning. It's not a term that necessarily poses grammar-related challenges. As a consequence, incorporating the word in your sentences shouldn't be that difficult. Here are a few sentences using "integrity": 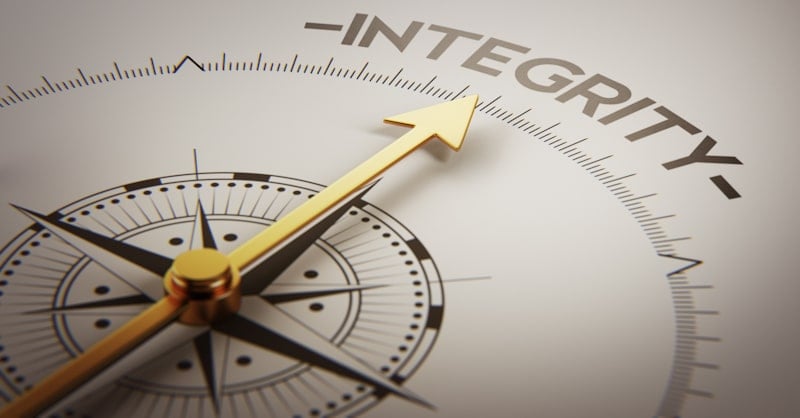 Example Sentences with the Term "Integrity"

The following are sentences employing the noun "integrity":

Integrity is an essential trait that everyone thinks they have but not all of them do.

The key or the first step toward truly being a person with "integrity" is carrying out self-introspection and following up with accepting your follies. If you think you are always correct and only people around you are demons, the problem lies with you.

People are not genetically coded to hold high moral and ethical values. Integrity is a trait that one develops through experiences, knowledge, etc. It is something that people should constantly strive for.

As far as using the word in your prose or even oral correspondences is concerned, it's imperative to know what the term means and also the set of attributes it encompasses or is identified with.

A reliable, honest person has high integrity. Someone who cheats, treats other people badly, is willing to do anything for their good alone, etc., doesn't cleary hold "integrity" as core.