Most people find it challenging to use the term "despite" in their sentences. This is because it can be confusing when it comes to putting a verb or noun in front of it. There are two patterns when it comes to the use of "despite."

The term "despite" implies that something happened instead of the other thing that might have stopped it from happening. It can be used to express defiance and the ability to ignore the apparent odds. In other words, the thing that happened is either surprising or unexpected.

The word "despite" can also express contempt, meaning, the feeling or the attitude of despising something or someone.

You can say or write despite doing something, for example:

You can say or write despite an inevitable fact, like the example:

It would also be best if you do not write or say the following.

Also, don't confuse in spite of with despite. Therefore, you should not write or say despite of.

If you are among those who find it difficult to use "despite," you're on the right track. This article will address various issues regarding the use of "despite." The profound insights will enable you to understand the common mistakes either you or people make in their sentences. All that you are required to do is read the post to the end.

As said above, the term means something that happened instead of the obvious. Hence it happened without being undeterred with known circumstances.  It can be used to express the conquering aspect or the defeated feeling.

The conquering aspect implies the hurdles one or something has overcome. On the other end, the defeated feeling means trying your best for something to succeed, but all goes in vain. Therefore you should not confine yourself to the positive aspect when using "despite" in your sentences. "Despite" can also be used to express negativity. You can also use "despite" to express contempt.

Like every other English word, "despite" has some synonyms. But it would be best if you be careful since not every synonym has the same meaning as "despite." The following are some of the synonyms:

How to properly use the word "despite" in a sentence

After knowing the basics of the term, the definition, and synonyms, it's time to put theories into practice. You need to work on your sentences.

Before anything, it should be noted that both "despite" and in spite of are referred to as contrast words.  And in most cases, they mean the same thing. Below is some of the common mistake that is made by most people in their sentences:

But why is it grammatically incorrect? It should be noted that the term "despite" is a preposition but not a subordinating conjunction. Meaning after the term, the user should put nouns; hence he or she should not place clauses that have subjects and verbs such as "he was annoyed, Sam did not fight."

In Spite Of Vs. Despite

In the English language corridors, in spite of and "despite" are common. Many people ask themselves whether there's a difference between the two. The answer is straightforward; the two terms are identical when it comes to the application framework. They mean "even though," "regardless of," or "notwithstanding."  Ensure their usage is compatible with the underlying meaning.

Where Can "Despite" Or "In Spite Of" Come In A Sentence

Both "in spite of" and "despite" are referred to as contrast showing prepositions. They can be used at the start of a sentence or in the sentence. What the user is required is an extra clause to exhibit the flip side. This implies that "despite" or in spite of are dependent clauses, they need independent clauses to be complete.  For instance:

What Comes After "Despite" Or "In Spite Of?"

Not every sentence that needs these prepositions; some can be independent without them. In most cases, there are three options when it comes to these phrases.

The sentence is correct since "temper" is a noun. But if you want to use subjects such as he or she or verbs like was, then subordinating conjunctions such as though, although, while, and even though should be used.

"Despite" can also be used to express the above sentences. But this is applicable only on nouns. See the examples below:

The sentence is incorrect since he had is a begin clause.

The sentence is correct because "having no money" is a gerund phrase. "He" has been removed hence making it not to be a clause. Because a gerund is treated as a noun, the sentence falls under the category of despite + noun structure.

Other gerund examples include:

In the English language, the clause has two components, subject and verb. In the sentence below, there are two clauses:

"Although I was drunk" is referred to as a subordinate clause or dependent clause, and it attaches itself to the primary clause, "I took more bottles." From the above, it has been mentioned that we should not use "despite" with a clause. But this is somehow tricky if you have "the fact that" in your sentence. Once you have "the fact that," a clause can be attached after "despite." 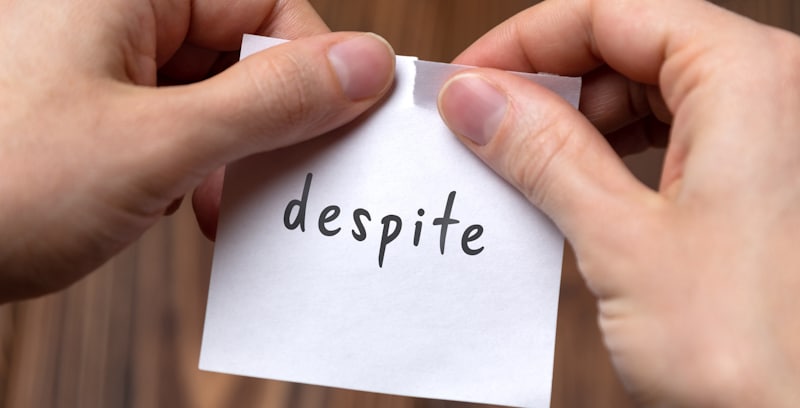 The term "despite" is one of the common words in the corridors of the English language. One should understand the meaning of the word before using it. In addition, the user should know the synonyms and where to apply the term. As mentioned above, the phrase should be used on sentences with nouns, gerunds, and fact + clauses sentences. Do enough practice, all is not lost, and soon you will be a pro in using the preposition.