Have you ever been so used to a particular word that you feel you already know a lot about it? For instance, if someone asks you to give several definitions of “destiny,” it will not be as easy despite being familiar with the term. With our detailed overview of destiny definition, meaning, and usage, you can embrace this word comfortably.

Destiny means “a specific outline of future events that seem difficult or impossible to change or avoid.” Also, define the word as “an unknown force or power that seems in control or can change events before they happen.”

This word might appear challenging to understand, but this is not the case. Every English word, either foreign or familiar to you, requires deliberate action in learning how to use it correctly. Otherwise, you stand to look misinformed when you regularly misuse English words in your speech. You’ll know more about destiny definition, pronunciation, history, and usage after reading this article. 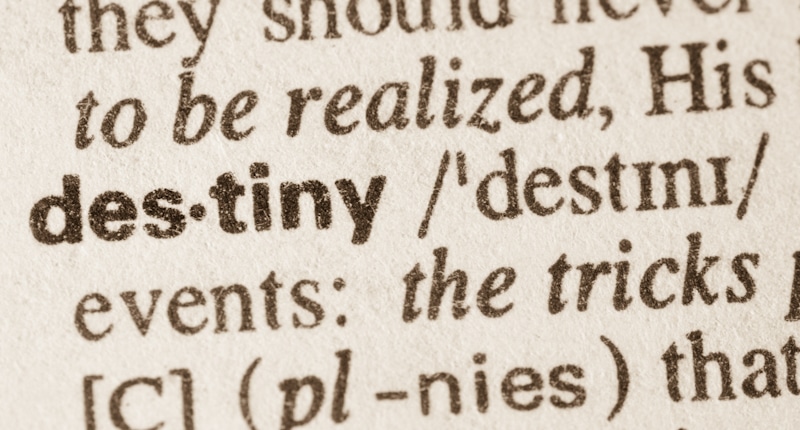 What Is The Definition Of Destiny?

The standard definition is a “predetermined succession of events that human influence cannot control.” It is the ultimate force believed to work behind the scenes, and people believe it is responsible for what or how things happen in the future. The plural version of the word is destinies.

People generally talk about a phenomenon already engraved somewhere whenever someone talks about destiny. If a certain sequence of events follows, there will be a particular outcome. For instance, it’s said that forming certain habits can shape your destiny, meaning that certain habits, when practiced, can result in a predetermined outcome, whether good or bad.

What Is The Meaning Of Destiny?

The word destiny also refers to events that will undoubtedly happen soon. This word also means an event or occurrence to which every person or thing is tied.

When the word means as per this definition, it refers to events beyond human control. When someone talks about destiny, they refer to an event or something meant to be or “written in the stars” in layman’s terms. For example, you may have spent a lot of time and money buying raffle tickets to win the lottery, but the winning trend shows you that it’s not your destiny to win.

Here are some more examples:

Based on the wide applications, we can conclude that the word destiny has multiple meanings in various contexts. Below are examples to expound on that.

What does destiny mean in religion? Perhaps the context in which the word destiny is frequently used is in religion. In Hinduism, destiny is everything that happens to human beings, both in the present and the afterlife. In Christianity, destiny is a place where a human’s actions will ultimately result in where they’ll spend eternity.

Is there a difference between destiny and fate? These two words have been frequently used interchangeably in conversations; however, these two words have different meanings. Destiny refers to a series of predetermined events that shape the future or a certain outcome. Fate, on the other hand, refers to the natural order of things that any force cannot alter.

The difference between these two words is that a person’s actions can directly change positively or negatively with destiny. Fate, however, cannot be altered or changed by anyone or anything. It’s important to note that circumstances in fate can’t be altered. Some people believe it’s possible to delay destiny and fate.

It can be challenging for some people to know words that have almost the same meaning as destiny. The terms below are acceptable synonyms of the word destiny.

How To Use Destiny In A Sentence

The term destiny is a noun; however, this word can take on different forms as an adjective and adverb. Some word forms have meanings that are no longer used in the English language today.

Make sure the word form you use in a particular context fits appropriately. If you confuse or misspell your choice of word form, you will pass the wrong message. We have explained the various word forms below to help you understand what we mean.

Destiny, destination (noun): Refers to the purpose for which someone or something is destined. The word also means a defined location at the end of a journey or a target point.

Destined (adjective): The word means confined to a predetermined set of occurrences.

The word destiny has no adverb form. Words such as designability, destinally, destinylessly, and designingly are nonstandard adverbs of the word destiny. You might have come across these words, but they are not formally accepted in English.

10 Examples Of Destiny In A Sentence

Go through and understand the following ten sentences that incorporate the word destiny. Some sentences have various word forms of destiny. Read to comprehend the word usage.

How Do You Spell Destiny?

Spell the word destiny as D.E.S.T.I.N.Y.

How Do You Pronounce Destiny?

The correct pronunciation of the term destiny is [deh. stuh. nee].

How Many Syllables Are In Destiny?

The word destiny originates from two words. It’s made up of the Latin word “destinare,” which later became “destinata,” and the Old French word Destinee meaning purpose or intent. The Old French word also referred to “the irresistible tenancy of certain events following a certain order.”

The word also stems from Greek and Roman mythology and is defined as the three forces or powers supposed to control human activities and life.

Also read: Indignant Definition – Meaning and Usage In A Sentence

When Was Destiny First Used?

The earliest record of destiny as an English word is in the 14th century.

Words are instruments meant to express emotion or thought. Nevertheless, to use them effectively, you need to familiarize yourself with the word’s different uses and meanings. The word destiny means “events that might happen in future” or “predetermined events or occurrences that happen without human interference.” The word should not bother you anymore now that you’re fully acquainted with it.