Whether you are going on vacation or buying a home, it is recommended to know the house specifications. There are various types of houses based on their structure and designs. Knowing these details will give you an idea of costs and what works best for you and yours. There is typically confusion in the term used for a residence when deciding on a Cottage or a Bungalow. Are they different? If so, what is the difference between them? These are the common questions that come up, and in this article, we will provide answers.

The cottage is a small and modest house, typically single-story. The term "cottage" can refer to any type of tiny house despite the architectural design. The bungalow is a particular building raised from the ground level, with large windows and veranda surrounding the house's exterior.

Cottages are usually small houses. They are known for being old-fashioned buildings. Nowadays, a cottage is a modest, often cozy home located in a rural or semi-rural location. Traditionally, cottages were one-room dwellings, but now, modern cottage floor plans are commonly just one large main floor that combines with a kitchen, bathroom, and one or two bedrooms. Often cottages have a high-pitched ceiling generally thatched. The purpose of the high ceiling is to provide an ample attic area, which frequently turns into a second or third bedroom floor. When this occurs, attics turn into a second floor for bedrooms; these cottages are marked as two-story cottages. 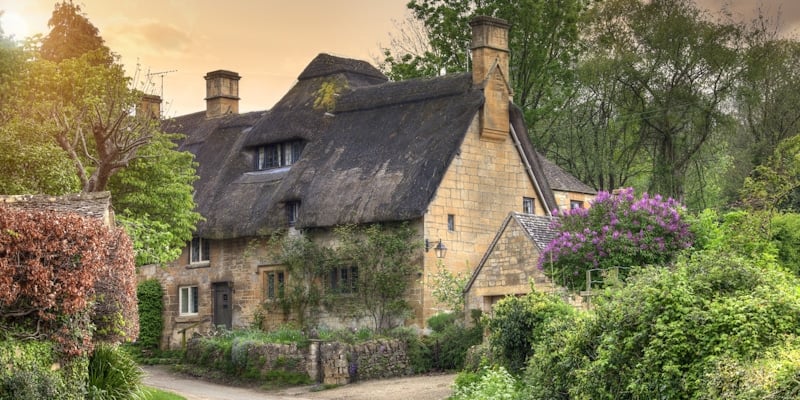 The cottage is a perfect vacation home due to its cozy and humble style, making it an ideal getaway for families. Typically rental or vacation cottages are located near lakes, beaches, rural areas, or in the woods.

What is the history behind cottages?

The term cottage came from the place of residence of a cotter or peasant. They were built during the middle ages for farmers and their families, and back then, the term for the cottage was "hut." The word cottage comes from England. These houses were prevalent in the English countryside. These tiny homes are often built with stone or wood facades and have a gabled ceiling. They also have an arched entryway, thick walls, small windows, and a brick walkway.

Because cottages originated in England to support their cold weather, they were built to keep the cool, damp air out of the house so it could remain warm and cozy inside.

Although cottages have changed a lot over the years, they have existed for centuries and still have many things in common with the cottage homes of today. These are some characteristics that remain the same:

The cottage has become very popular lately as a seasonal home for vacation or as a recreational home. Most people prefer a modern or fresh style when renting or purchasing a home instead of a cottage due to its small sizing and plane division.

The Cottages in the English countryside were built as an economical form of weatherproofing with thatched roofs. These structures often feature cottage gardens that grow up against the buildings as part of their architectural style.

In Nordic areas, the cottages are built from wood and often painted red to make them stand out from the surrounding countryside's summer greens and winter whites. These cottages typically serve as vacation getaways for families.

Canadian cottages are mainly built near bodies of water such as rivers or lakes. Their structure has two stories, and most of them are not to be lived but for seasonal stays.

These cottages, also called cabins or chalets in the United States, are mainly built in woods. We can find them in the woods or near bodies of water.

The bungalows are raised from the ground level, about two feet or more; they are built with large windows, and because the climate of southeast Asia is scorching, to help distribute the air inside the house, they have wide hallways. Because bungalows are elevated from the ground, all of their styles have steps leading up to the front door, with large verandas surrounding the house's exterior. Traditional bungalows are only single-storied dwellings. Bungalows are fantastic options for buying or investing essentially because they are not as expensive in materials as cottages are and because their demand is sharp. If you have children, bungalows are a great option because there's not much spacing to lose an eye on them and bungalows tend to have beautiful backyards great for kids to play and have fun.

What is the history behind bungalows?

Bungalows are originally from India and Bengal, but their design spread throughout the world and adjusted to suit the region. They became known and popular quickly in the United Kingdom and the United States after World War II. People started building and buying bungalows because the architectural design was made for a single-family. Bungalow homes, usually one-story, aim to be low maintenance and comfortable.

They can be colorful and bright, just like you see them in old movies with decorative porches and columns. They are recently owned by older adults who prefer a classic style, while younger buyers decide to purchase modern houses with no decoration or modernization needed.

Based on the variations and locations needed, bungalows are not built the same way nor material; therefore, we can find different types. Here are some types of bungalows:

The term Craftsman describes a classic bungalow, despite its location. Typically, these homes feature street-facing gables with shingled ceilings and often painted stained brown or dark green to merge with nature.

California bungalows differ from Craftsman on the materials used in their construction. These bungalows' home exteriors typically use redwood or stucco and no bricks.

The interiors of modern bungalows are usually light and fresh with modern touches. To provide a sense of motion, they have curved corners. Its construction is based on concrete, glass, and bricks.

A group of architects in Chicago designed the prairie bungalow style. These homes have massive piers used to support their porch roofs and rows of casement windows, broad and flat chimneys, and contrasting wall materials and trim.

To summarize, cottages and bungalows might be the same in sizing and single-story, but they are different. Cottages come from the northeastern region, where they needed warm and cozy homes to combat the cold weather. Bungalows originated from India in the Bengali region. They needed to build homes where the air could freshen up the house to fight the heat and humidity of the area. They also made the bungalows two to three feet off the ground to avoid flooding when they had a rainy season. Cottages are a little more expensive than bungalows, but they are both great for family gatherings or if you are looking to have a private getaway.