Clickbait headlines get extensive negative connotations. Most often, clickbait is associated with fake news and those spam sites that only want traffic and ad revenue without giving value. If you're in digital marketing, you already know the significance of headlines when driving clicks and building traffic.

That's where clickbait headlines aim to achieve; to trick internet users through impressive headlines without giving useful and quality content, as the headline suggests. Clickbaity headlines have tricked almost every internet user at some point.

Clickbait is a sensational, ridiculous, and misleading headline that tricks you into opening an image, video, or article link (it can be in either combination). Most often, you aim to continue reading and get the entire information in detail. Rather than presenting the intended purpose the headline promises, the accuracy and quality are questionable.

On the bright side, when used correctly and for a good reason, clickbait works perfectly well. Whether you're a blogger, digital marketer, or business owner leveraging various platforms to grow your brand, you need to understand clickbait extensively.

In this article, we highlight everything that you need to know from Facebook, YouTube, and BuzzFeed clickbait examples to coming up with catchy headlines that don't mislead. But first, let's understand what clickbait is.

The Use of Clickbait

Though widespread in the current digital era, clickbait headlines have been used for years to lure potential readers. Social media sites like Facebook, magazines, and websites that earn from content are places you can find juicy headlines that capture your attention, only to find the content you never wished for, with so many ads.

So, why do businesses use clickbait?

A study published in BuzzSumo, focusing on headline phrases on Facebook, indicates that clickbait-y and catchy headline phrases are vital when it comes to generating engagements in the platform. That evidences how clickbait headlines can drive clicks.

You've probably seen those headlines that read, "You won't believe this…" or "This is what…" and much more. The sensational nature stimulates your emotions, and users end up clicking without a second thought.

Clickbait also aims at arresting your curiosity. With that, you want to know more about the captivating headline. That forces you to keep scrolling throughout the article and clicking those ads. Some marketers use the headlines because they're appealing and create a desire to find out more.

Clickbait headlines used appropriately, without misleading content, generate good traffic. Again, the keyword here is "appropriately." Facebook and other platforms are quite strict on those using misleading clickbait, and they'll ban you from the site.

Well, having said that, let's see how marketers have employed clickbait on Facebook, YouTube, and BuzzFeed. You won't believe it. 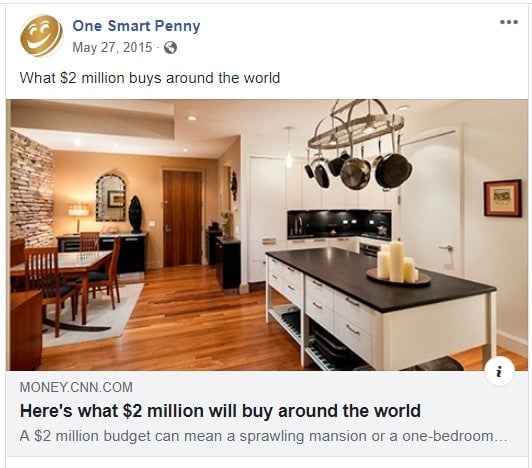 Anything to do with investing, saving or spending attracts viewership and readership. People want to know more about their investment journey.

One Smart Penny piggybacks on success brand to capture the attention of readers. In this Facebook post, the message and images are crafted brilliantly for easy clicking. Everybody wants to know what $2 million can buy. 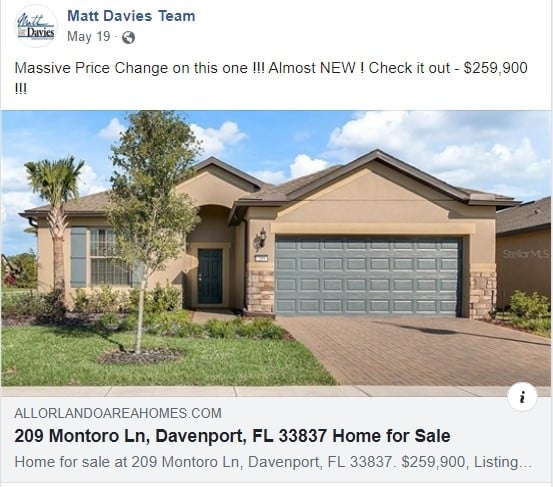 When focusing on real estate, buyers want to know whether prices favor them, the house's condition, and the price. Capturing those three things attracts everybody interested.

Matt Davies Team employs this trick on their Facebook page. It's clear in one of their posts that reads "Massive Price Change on this one!!! Almost NEW! Check it out – $259,900!!!"

The language seems hyperbolic, but it delivers the message that leaves interested buyers curious about the mentioned property. The image also adds some magic. 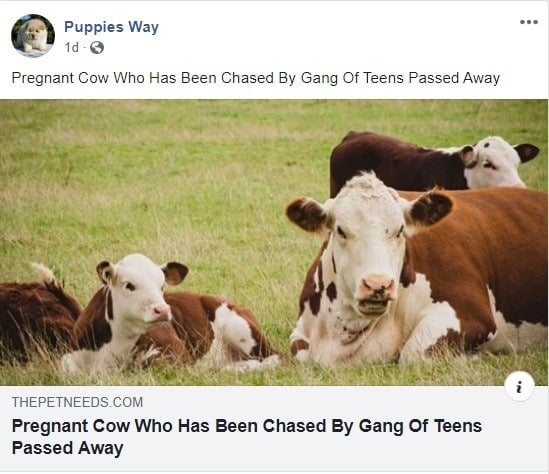 Puppies Way is a home for clickbait. Their headlines are so captivating and promising. Almost every post has such a headline. For a while, let's focus on this post.

Their headline and post have the same wording, something that doesn't happen often. That tells you that you have to click through to read the content further.

The posts create some emotions, and everybody wants to know why the gang of teens chased the pregnant cow until it died. Many will sympathize and won't pass the post without clicking; the reactions, comments, and sharing evidence it all.

With the increasing number of content creators on YouTube, everybody is finding a way to stand out. Many have adopted clickbait tactics, and through impressive titles, viewership is on the rise. Note that good content is a must. 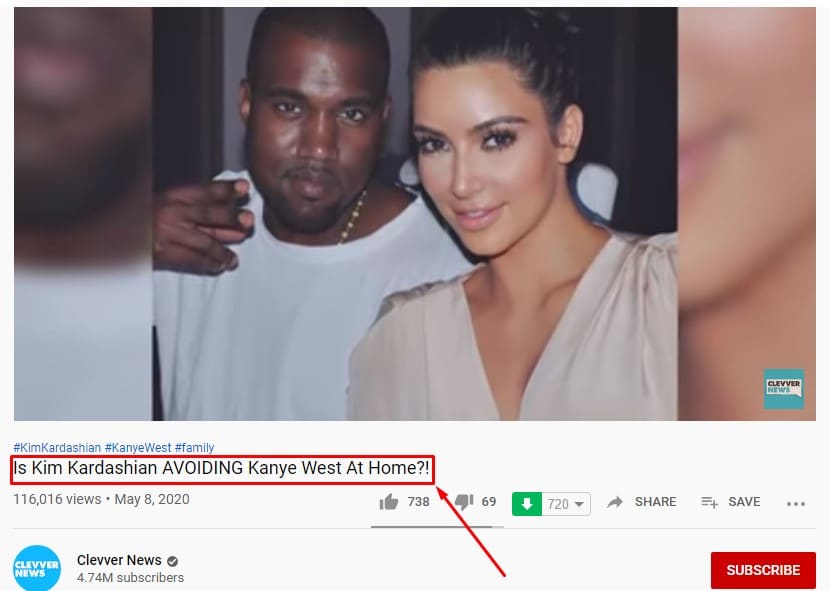 YouTube is full of drama. Anytime a celebrity makes a mistake, YouTubers will come up with content to respond or even criticize them.

After rumors that Kim Kardashian and Kanye West were not in good terms, Clever News went ahead to let the world know what was happening at the celebrity couple's home and why Kim avoided Kanye.

The headline is in the form of a question, and since there has been a lot on the streets about the family, they claim to have real reasons from insider sources. If you're that person who loves following celebrities' life, the headline will capture your attention. 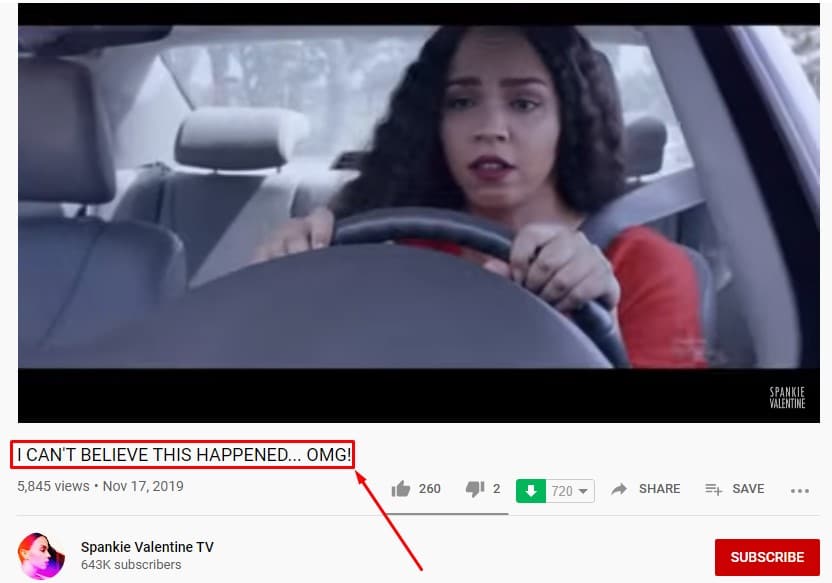 A headline that leaves viewers with great curiosity. In Spankie Valentine YouTube channels, she has a video titled "I CAN'T BELIEVE THIS HAPPENED… OMG!"

The title is echoed with a description that still doesn't detail what the special surprise is. Spankie describes it as something that has finally happened after waiting for long. More so, she wants you to be part of it and pull together.

Such strategies do work on YouTube, but quality content must follow. I don't wish to spoil, but it turns out in the video that the vlogger was sharing a link to her new free album.

BuzzFeed headlines are one of a kind. If you've been on their website, you already know that. But here is the thing, they have known what works for them and adapted it with perfection.

Let's look at some of the BuzzFeed clickbait examples next.

Newsjacking is not different from piggybacking because it's focused on famous persons with controversies of some kind to win click through and readership. It's not a new thing.

It works where people are following a particular person or topic. In this case, and considering the current moments, Mr. President is the talk of the street. Anything catchy on political temperatures or current pandemic converts well.

The title here talks about 12 people (who are they?) speaking against Mr. President (what did they say?), which leaves everyone wanting to know more.

We can all agree that some topics are quite fragile, especially when discussing gender, race, or religion.

BuzzFeed informs its readers with the clickbait, and many want to know and understand the situation at hand. For instance, this post talks about a black woman without indicating personal details.

It goes ahead to talk about a church lawn and some men coming in the yard, with no mention of church or men's name. Now that's where the hook comes in.

From the post, we all want to know what these 24 things are. The major hook is on "tears of joy." That's an emotional phrase.

However, these sensational phrases must reflect readers who click to read your content. As we said earlier, multiple sites penalize those misleading the readers, and that's not what you want.

With an understanding of clickbait examples, the main question now is how to know the good and bad clickbait. Here are the questions you have to get right.

How to Use Clickbait That Works

It's now evident that clickbait headlines can be used for wrong and ethical reasons. On the right side, quality, realistic, and promising content tops before anything else. Here are a few tips for using clickbait that works.

Regardless of how everyone puts it out there, misleading clickbait headlines with exaggerated claims are not worth it. It hurts social media reach, search ranking, and, worse, your brand credibility. However, ethical, trustworthy, and well-crafted catchy headlines will help you get attention and conversion.

You now know what clickbait is and the eight (8) clickbait examples on Facebook, YouTube, and BuzzFeed to check out. Let's hear your thoughts on the topic.