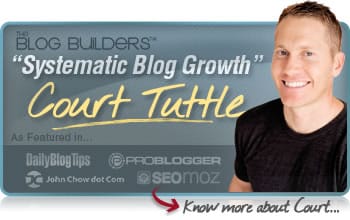 At the time of this writing, blogging has grown in popularity among individuals and businesses. People use it as a form of self-expression or personal promotion. Businesses use it to become thought leaders and convert visitors into customers. "Blog" seems to be the catchphrase of the decade. People use them to talk about their dogs, their employment problems and their back pain. A seemingly endless parade of information on any topic you can dream of is constantly spouted onto the web through blogs. Thinking of starting a blog yourself? Maybe you have one and it sucks. Whatever the case may be, you're in for a treat. Recently, I had the pleasure of conducting an email interview with Court Tuttle, a professional blogger and founder of the thekeywordacademy.com. Court has been heavily involved in the world of blogging, Internet marketing and SEO for several years, and he has built some extremely profitable websites. He was kind enough to take the time to share his expertise on effective ways to compose and use blog posts. Court also has a very comprehensive starting a blog guide if you are looking for an in-depth walk-through of how to set up a blog.

Q: I read about people interested in starting a blog for a variety of reasons. What is the best strategy to learn what you should be writing about?

A: That's a great question. I actually use more than one method to figure out what to write about.

1. Keyword Searches in Google: I want to write about topics that people are already searching Google for. By using the Google Adwords Keyword Tool, I can gauge potential interest before I write a post.
2. Questions in Forums: Almost every niche has forums where people talk about the same subjects that people blog about. I like to go to those forums to look at the questions people are asking. If I can answer them, I do so via my blog. Not only does it give me great ideas for posts, it can also give me traffic from the forum.
3. Testing and Experimentation: My best blog posts come from personal experimentation. Once you get to know a topic really well, you will start to notice things that might be useful, that aren't talked about yet. It takes a while to get a feel for this in each industry, so this method requires patience. Bide your time and use the other two methods until you start to identify these opportunities.

Q: Should a blog post always contain citations to outside sources?

A: No, I actually don't think that they should. In fact, some of my most effective posts haven't cited outside sources. Let's do an example to illustrate:
Let's say you decide to write a post about 'Losing 10 Pounds By Eating Only Vegetables.' The absolute best thing to do would be to eat only vegetables until you've lost 10 pounds. That way, you can report on what happened, exactly as it happened. You can tell people that you felt horrible (or great), you can tell them how long it took and what the side effects for you were, etc.

In this example, I don't really think there would really be anyone to cite, unless you could find a study that evaluated this exact thing. I think that the post would still be very effective without citing an outside source because of the originality and experimentation.

*Side Note: Court touches on something very important here, which is primary research. It is typically far more powerful to go out and discover something for yourself based on your own experiences or testing than to write about a subject standing on the shoulders of others. 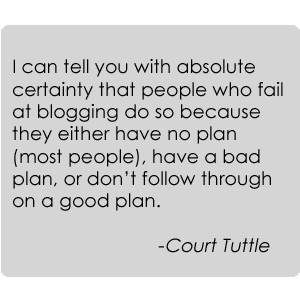 Q: Should I be using my blog posts to target more keywords? If so, how many words should I target in each post?

A: I don't think that every post should necessarily target keywords, but some of your posts definitely should. When I do a keyword-targeted post, it focuses on one primary keyword. But I also like to be aware of closely related keywords so that I can try to get them into the post, if it's natural to do so.

Q: One of the best parts about blogging is generating a conversation among a community of people. What are the most effective ways to go about engaging people with my blog post?

A: There are a lot of ways to engage people. The most effective way that I've seen is through controversy. Since controversy doesn't fit well with my personality, I choose to engage people through original instruction. I cut my own path and tell people about it. Some of the things I try work and others don't. I think that people appreciate that I'm willing to do the experimentation so that they don't have to.

A: To be 100% honest, I believe that this is a question that you shouldn't even ask yourself. I've seen effective posts that are 100 words and I've seen other effective posts that are massive. Right now I'm working on a post that should end up having over 5,000 words plus four hours of video. For it to be the best post out there on that subject, I think that's what it's going to take.

Should every post be like that one? Definitely not! I do other posts that are just audio interviews with a really short write up.

I think that your focus should be 100% on making each post as good as you possibly can. Length isn't always a factor in that.

To be the most effective, you kind of have to stop seeing yourself as a blogger that 'writes'. You instead need to see yourself as a leader that tests, studies and reveals. 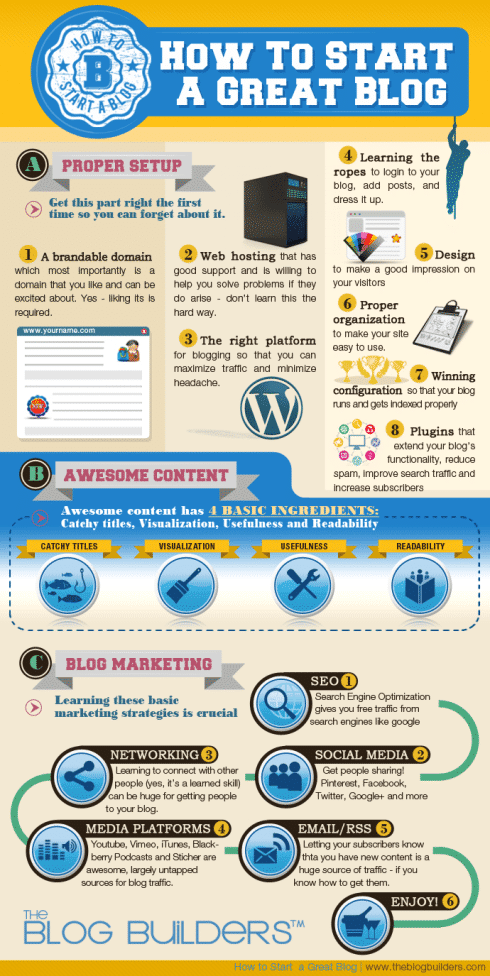 Click on the infographic to see a larger version at TheBlogBuilders.com

Q: It seems like even though I read my posts a few times, I still manage to miss basic grammatical and/or spelling errors, is there a foolproof method for making sure this doesn't happen?

A: I do my editing separately from my writing, with a nice period of time in between these tasks. Most of the time, I edit posts at least a day after I write them. When I come back to the post, I have my editor hat on — I'm super critical of my writing. I've never been able to get the same results if I edit right after I write. At that point, I'm too familiar with what I wrote and it makes sense in my mind even if it wouldn't make sense to others.

If that doesn't do the trick for you, you need to find a friend who can edit for you. I traded editing with a friend when I wrote my last book. She edited mine and I later edited hers.

Q: What is the best way to structure a post? For example, should I have headers over my paragraphs? Bullets? Numbered lists where relevant? Images? Videos?

A: Headings are REALLY important. I won't even read a blog post that doesn't have headings and when I get to a new blog post, I scan the headings before I decide to read it.

Images are really effective at pulling people in. And they make a huge difference in the amount of sharing you're able to get. You won't get a lot of action on Facebook or Pinterest if you don't have at least one image that can be used to share your post.

I use bullets and numbered lists in most of my posts.

Q: Is getting information and/or input from outside authority sources a good idea?

A: Yes – it's a great idea but I would recommend taking it farther than that. Instead of just gathering available information, go directly to the source – the person responsible for the information. By interviewing that person, you will have a much more valuable piece of content. Most people are really lazy in this regard. They want to create a blog post in a half hour so they just look up what's available in Google, link to some stuff, and post their post. It's hard to get traction that way because you end up being the same as everyone else.
If you could get in touch with an authority and interview them, then you could really have something. In the least, you'll have something original and the authority might tell his followers about the interview.

If you were a little lost on how to write a blog post or what to do with it, you now have some great answers from someone who has made a living doing it. If I've learned anything in my short time with web marketing, it is that writing good content is hard. It isn't always clear what your target audience will find valuable. The most important thing you can do is find a topic that you are passionate about, and do your best to provide content that is helpful to your audience.